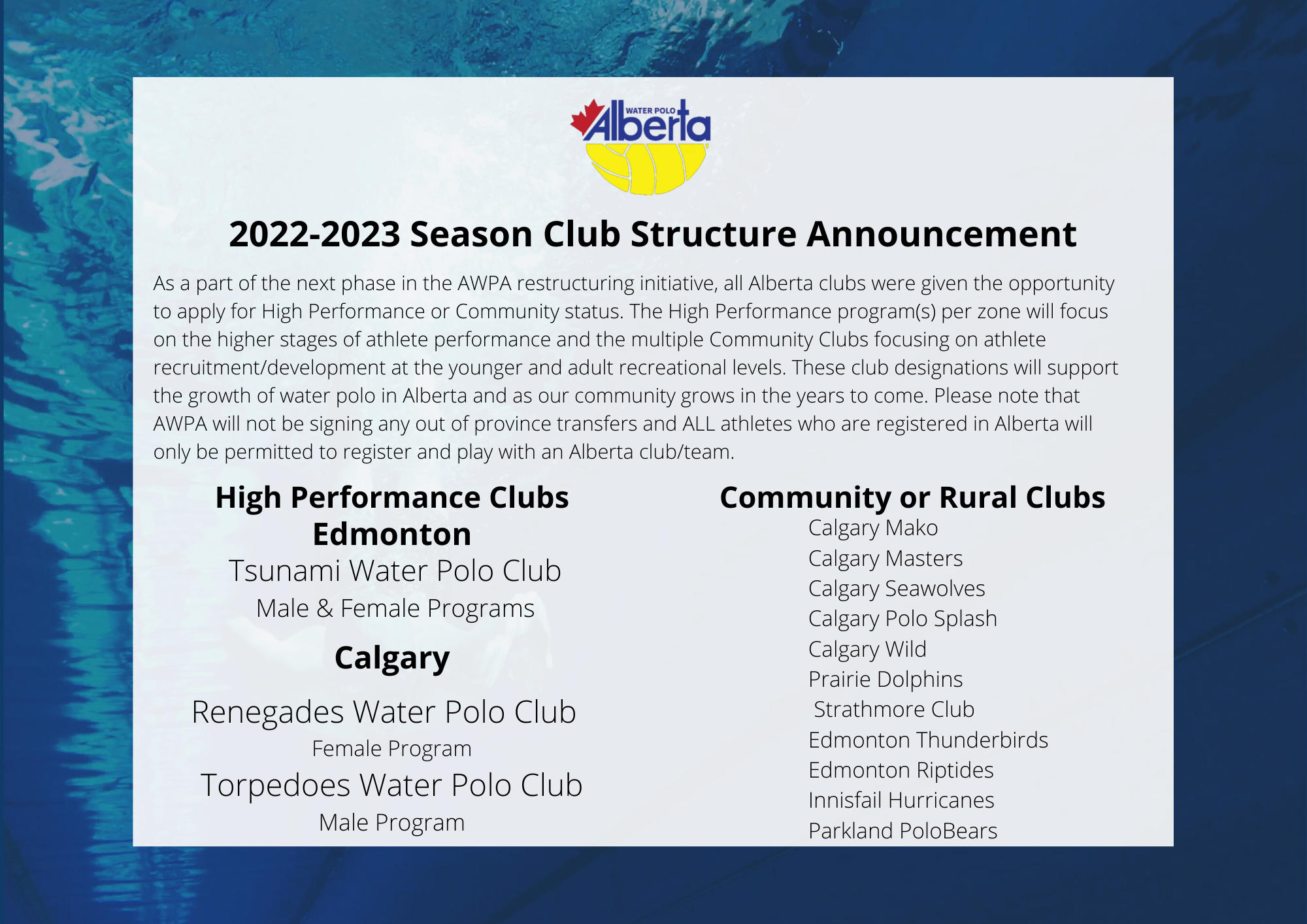 The start of the AWPA restructuring initiative will have AWPA clubs classified into two main categories: High Performance or Community. For the time being, only one High Performance Program per gender will be permitted per zone with multiple Community Clubs focusing on athlete recruitment/development at the younger levels. These club designations will support the growth of water polo in Alberta and as our community grows in the years to come, the potential for multiple High Performance Clubs in each region will be considered.

This restructuring project will have many positive impacts on Alberta’s water polo community such as:

AWPA  is excited to work together as a community to advance water polo at all levels in Alberta. Thank you to all clubs, stakeholders and consultants for your input, feedback, patience and support with this strategic initiative. Additional information on the Alberta Club Restructuring Initiative can be found on the AWPA website.

Q: What is the difference between a High Performance Club and a Community Club?

A: Here are key differences between High Performance Clubs and Community Clubs. More information can be reviewed in the full AWPA Restructuring Document.

Q: Can a club register teams in NCL and the Alberta Provincial League?

A: No. Clubs will need to specialize as either High Performance or Community. Athletes, however, may be registered at multiple clubs through “Bridge Programs” which could allow them to compete at U14 and U15 events.

Q: My athlete has always played for one coach/club. Do they need to switch clubs?

A: If your athlete is wanting to compete in the NCL then they must be registered with the designated High Performance Club in your zone. If they are not interested in NCL, they can stay with their Community Club and compete in the Alberta WP4s league. AWPA will not be allowing out of province transfers moving forward, this means if an Alberta athlete wants to play with NCL, they will need to register with an Alberta team.

Q: Who will coach at the different clubs?

A: While clubs will be responsible to hire their own coaches, AWPA will work with clubs to have coach crossover between High Performance and Community clubs. This will support athletes as they transition clubs, share Alberta’s coaching resources, promote coach development in Alberta, and create strong links between Alberta clubs.

Q: My athlete currently competes with NCL programs outside Alberta. Will they be able to continue this next season?
A: Alberta has NCL club options at all levels within our province. Next season there will be no out of province transfers allowed (ie. training with an Alberta club but competing with a club in another province).